I feel so blessed that I was able to attend last year’s countdown to 2011. I booked a room at Panpacific hotel on 31st Dec so that my classmates from HCI and I could watch the fireworks from Marina Bay. Although the price was quite steep, I made sure most of my classmates could attend so that each of us would pay lesser for the room. I wasnt disappointed because in the end everyone made it for the countdown, and in fact more than the expected number of peeps turned up for the event.  A few of us met for lunch at Marina Square before checking in at Panpac. This was the first time I felt like an adult. I had to use my debit card to check in, sign my name on cool sheets of paper, before being handed over the keys to the room. The room was on the 31st floor, and it has an amazing view of Marina Bay. In just a span of about 2 years, Marina Bay is transformed into a bay with great buildings and a well-designed waterfront. If I fish out pictures of Marina Bay 2 years ago and of today, I can see at least 10 new buildings including the brand new Marina Bay Sands and The Singapore Flyer. Wow. Thats how much we have progressed in such a short period of time. As I watched the view of the Bay, I noticed the view getting blurrier. 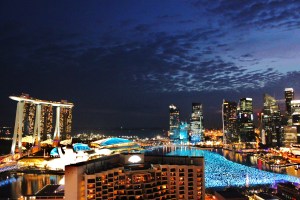 It was actually raining. I went into the room and started playing with my friends. In the evening, we went to Marina Square to buy food (junk food in fact) back to hotel to eat. And the countdown to 2011 began.

At about 11:20pm, Shuyang and I webcammed with Silu, Tiantian and Aaron who were not in Singapore at this time. Silu is back in her hometown, while Aaron and Tiantian were holidaying in Hainan. They got to watch the fireworks, through the webcam! Haha.  It was somewhat a big gathering of the 6A pupils and I really hope that this will become an annual event. While I was kind of disappointed that I couldnt use my DSLR to take photos of the fireworks at 12 midnight, the fireworks that erupted from Marina Bay was just so breathtaking that I was very sure I was not breathing at all during the whole duration of the fireworks. They just kept coming, and the stunning fireworks display just sent my heart palpitating. It ended with a loud bang, and cheers erupted from our balcony, and the hundreds of thousands of party-goers below. The cars honked loudly to usher in the new year, and the stage at the Float@Marina Bay started blasting loud music to welcome a new decade. I looked at the breathtaking view and tried hard to take in the sights and sounds. Indeed, a new decade of hopes and dreams has arrived for all of us. Happy New Year. 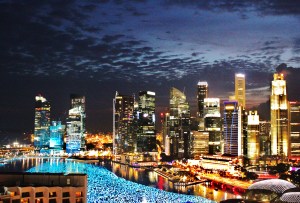