Orchard Flood
I realised Orchard Road experienced the worst floods in decades after reading the newspapers in the barber shop in camp on Thursday. Living in camp makes you deprived of news from the outside world, one thing I really hate about.
Anyway, this flood has created lots of debates over the internet whether to blame the government for neglecting the drainage systems around the city area, or to applaud them for being the first to analyse the situation and giving a quick response to the situation along our famous and only beloved shopping street. Singapore is so small that we only have one shopping and entertainment area of such scale, and now it seems nature is so jealous that it wants to destroy it. Well, simply because the litter clogged the drains…leading to the flash flood which resulted in traffic chaos across the city and inconvenience to thousands of commuters going to work that day. I think if there are any more floods coming up, lets say outside the Esplanade area, the PUB will come up with the reason that it was due to the old unwanted musical instruments thrown into the drains that resulted in the floods. Seems like it is now time for the PUB to seriously check every major monsoon drains in Singapore, and the whole drainage system in our country. Judging from the fact that flash floods are occurring more frequently, we must now look into the urban planning policies, whether we are able to sustain our infrastructures on such a tiny island.
Maybe it is time to improve these systems before planning to increase the urban density of the country. Or maybe its just the litter, so its time for us to love the environment and stop littering. In fact there is now one more reason for not littering, its not just to keep the city clean, but to prevent mega huge flash floods from occurring again. I have not heard of Tokyo’s Shinjuku district under water before, and this is a huge embarrassment for Singaporeans. This is a major shopping belt, with lots of tourists and foreigners living, working and visiting that place, what will they say? Please, I dont want to call Orchard Road Orchard River. I LOLed so much when I read news about ugly Singaporeans picking up accessories, bags, iphones, ipods etc washed away from shops by the floods. ( How I wish I was there!! ><) 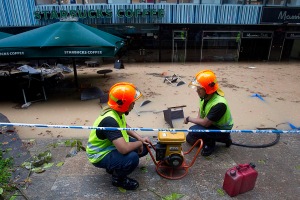 Missing School days
After watching the video clip of my band juniors playing for HCI impressione 2009, I was filled with emotions as I started recalling the happy days spent practising in the band room with my band mates, learning a new instrument as well as making new friends every now and then. Those were the carefree days, where friends and happiness were abundant. Now, while I make new friends in the army, I dont feel as comfortable as I do in school. The people I meet in school somehow have the same personalities as me, so I can click well with them. Same frequency, as we say. Thus until now, I am still very close to my hwachong friends, as compared to my army friends. I learn a lot from the army, but somehow I just feel that it is not what I want. Although I got into the vocation I most badly wanted, I was rather put off by the regimentation and strict pt that we get every alternate days. Maybe I am weak in my physical fitness, but this is giving me mental torture, and I dont like the feel of it. I am missing my school days so much that I really hope I am Hiro Nakamura, and stop time, or even reverse it, so that I can spend more precious time with school work and friends. I totally wasted my two years in jc, with my disappointing Alevel results, so I really want to go back to where i began and start all over again. The orientation week, the athena fac com selection, band auditions, school activities, concerts, faculty events, school exams, class outings. I MISS YOU! 😦